Something Big is Happening in Akron

The state of Ohio has birthed some of the best lady hooper’s to ever play the game. As an example, Cincinnati has Kelsey Mitchel; Cleveland has Jantel Lavander; and Columbus has Jordan Horston. Yet the question still remains, “What about Akron?” Well I’ve got the perfect answer for you but it’s not just one player, it’s 3.

All three of these young ladies are on track to put the city of Akron on the map like never before. First up we’ve got Anna Hurst. A 2024 guard who carries the nickname “Blonde Mamba.” Anna who is currently ranked #25 on the Middle School Girls Elite website and #51 on the Naismith National all American Youth Report. Anna currently attends Stow Middle School in Akron, Ohio. Be on the look out for this young lady as she is fierce and ready to take on anyone in her way.

Hadley Hadju who is teammates with Anna Hurst on the 2024 SMAC Akron is another dominate player straight out of the city of Akron. Hadju comes ranked #35 on the middle school girl’s elite ranking and attends Revere Middle School in Akron, Ohio. Hadley is a dominant offensive and defensive guard. She can keep up with the best of them and getting sharper and sharper every time she plays.

To finish up the roster for the Fab 3 we’ve got Isabella Callaway an absolute floor general that can run the entire show. Callaway currently attends Copley Middle School where she helped lead her team to a 2018-19 suburban league middle school Championship. Isabella is currently ranked #11 on the Naismith National All-American Youth Report. If she continues doing what she’s doing I’m sure she will excel at the next level. AAU season is almost amongst us and SMAC Akron 2024 team is ready to go.

Every team has had a combination of players that are the heartbeat of the entire organization. For example Miami heat had Lebron, D. Wade and Chris Bosh.  The 2008 Celtics had Paul Pierce, Kevin Garnett and Ray Allen. Lastly, Golden State had the Splash Brothers and Draymond Green.  With that being said, these three young ladies are that “heartbeat” for SMAC Akron’s AAU team. This organization had an unbelievable 40-5 record last season and is projected to do even better this upcoming season.

SMAC Akron is led by John “JC” Callaway who’s track record speaks for itself.  John has over 15 years coaching experience and is in the process of coaching his daughter Isabella Callaway and his son’s 6th grade SMAC Akron team. John played at Kent State University under coach Gary Water who won a MAC championship and went onto the NCAA tournament for the first time in school history. We expect big things out of this team in 2020.  We will keep you updated.

Posted by Buckeye Prep Report Founder at 9:32 AM 16 comments:

Although we rarely spotlight players so young, the things Terry Holt III (4’1”/PG/Dayton/2031) is doing as only a 1st grader beg to be recognized.  If you’re wondering what Holt is doing; he has already established a national reputation as one of the top players in the nation in his class based on his Coast2Coast and Top25Scouts ranking, and the list of power house teams he runs with is quite impressive.  Specifically, he has played for such brand names as All-Ohio Red, Bates Fundamental, Ohio Kings, Team TJ Ford and the All Indy Gym Rats.

Because Holt is so highly skilled, he is able to compete against teams and players 2 years older. From the mix tape below, it’s clear Holt has elite ball skills, is aggressive and can really score the rock.  Although Holt is averaging about 16 points per game, his on ball defense and ability to force turnovers is quite impressive as well. You can check out more of Holt’s accomplishments by hitting him up on Instagram @terry_t3.  We intend to keep an eye on Holt’s development.

Although he’s still very young, Maurice Hamrick Jr.’s (5'1"/PG/Columbus/2028) mature game allows him to compete against kids 2-3 years older than himself. With the amount of time Hamrick logs in the gym (just check his social media account), it’s little wonder why he already plays the game at such a high level.

We’ve seen Hamrick compete at our Buckeye Prep events on several occasions, so it’s clear to us that his skill set is elite.  More specifically, Hamrick’s ball skills set him part from his peers, as does his feel for the game, IQ, pace of play and ability to score from all 3 levels.   We also like Hamrick’s ability to shoot from range and create space for a shot or drive.  Thanks to the video below from our guy @T3TV, you don’t have to take our word for it; you can see for yourself!

Although Hamrick is offensively gifted, we’ve seen him excel as a playmaker and make everybody around him shine.  Case in point, at our elite showcase last spring, Hamrick could have easily dominated our all-star game offensively, but he decided to put on a clinic by using his court vision and passing skills to feed the rock to his teammates, resulting in him just missing out on MVP honors.

Based on his talent, Hamrick is not only ranked among the top 4th graders in Ohio, his game has garnered national attention as well.  This the spring and summer, Hamrick will be running with a 6th grade All-Ohio Red team as well as a 5th grade Wildcat Select team based out of Pennsylvania. This winter, Hamrick is playing in a couple of local basketball leagues, one of which is with 7th & 8th graders.  You can check out more videos by following us on instagram at @robt1, and you can also catch Hamrick and his All-Ohio Red squad in action at our Buckeye Prep Invitational Tournament in March.

We’ve been following his career since he was in the 4th grade, and from what we’ve seen and heard recently; Delmarr Blanton’s (6’0”/CG/Dayton/2024) talent has carried over to the middle school level.  As the starting shooting guard at Trotwood Middle School, Blanton is proving to be a problem for opposing players.  In fact, so far this season, Blanton's scoring average is 22 points including 26 point game high.  According to Coach Render, an assistant coach with the team, Blanton "...is the best player and makes everybody better."

Blessed with a strong frame, athleticism and an aggressive approach to the game, Blanton is at his best when he is powering his way to the cup.  He’s not just about driving and finishing, as Blanton is more than capable of knocking down treys if left open. Check out the video below from our guy Terry Holt (T3TV) and you too will come to appreciate Blanton’s talent.

Blanton has always been one of the best players in Ohio in his class as evidenced by his multiple MVP nods at our elite showcases and tournaments; but his dominance at the middle school level confirms what we’ve always seen in him; this kid has game. In 2020, Blanton run with a  Bates Fundamental team which will be based out of Cincinnati. You can catch Blanton and Bates Fundamental in action at the Buckeye Prep Invitational Tournament scheduled for March 27th-29th.

Thanks to T3TV’s Terry Holt, one of our newly added staff members, we have fresh new video footage of Colton Clevenger (4’3”/PG/Lewisburg/2029), who is absolutely tearing it up in gyms all around the Gem City. Clevenger's rep goes well beyond the Dayton area, as he has logged in standout performances at elite events such as McDavid All-American Camp in South Carolina and the KBC Midwest Spotlight Camp in Lexington, KY.  In addition, he went for 25 points at the Dru Joyce Classic and lead his team to a championship appearance last season

Since kindergarten, Clevenger has been running with the nationally ranked (pre-season # 19th) Ohio Kings, where he has been a consistent standout performer. In fact, Clevenger lead his 33-5 Ohio Kings squad in scoring last season, averaging of 19 points per game.  According to his coach, Clevenger “…Does what it ever it takes for this team to get a win; rather that involves scoring 30 points or dropping 15 dimes.”  Clevenger is also known for his work ethic and is often described as a gym rat.

As the highlight video below clearly reflects, Clevenger is a highly skilled PG with loads of talent, confidence and swag.  Not only is Clevenger’s ball skills elite, he has a great feel for the game and he has a high basketball IQ.  We also recognize his ability to finish with either hand, shoot from deep off the bounce, and knock down shots from mid-range.  Oh yea, Clevenger has a killer crossover that allows him to get to the rim at a high clip. Moreover, he’s not just a scorer, as his court vision and willingness to share the rock allows him to find and feed open teammates.  We also noticed his willingness to sit down and defend.

From what we’ve seen so far, Clevenger in not only one of Ohio’s top young players, he has to be one of the top players in the country.  In fact, we’re not alone in our respect for his game, as Top 25 Scouts has Clevenger ranked as the 9th best player in the nation in the class of 2029.  You can catch Clevenger and his Ohio Kings squad in action at our Buckeye Prep Invitational Tournament scheduled for March 27th-29th here in Columbus.  We intend to keep an eye on this kid!

Posted by Buckeye Prep Report Founder at 11:19 AM 7 comments: 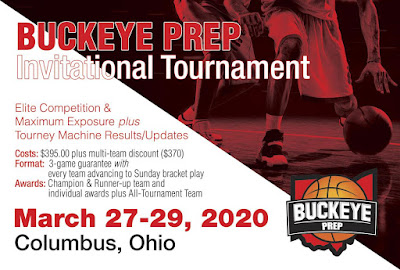 Posted by Buckeye Prep Report Founder at 9:37 AM 6 comments: