﻿
The Buckeye State will have 2 representatives in Championship Bracket play at the 7th Grade AAU Nationals in Memphis, Tennessee. Both the Cincinnati Lakers and the Elite Cavaliers will play their first round bracket games today. Unfortunately, the two teams could matchup tonight at 6:20pm if the Elite Cavilers get by their first round opponent, the Arkansas Hawks.

The Lakers received a first round bye after finishing 3-0 in pool play. On their way to bracket play, the Lakers defeated Georgia’s Atlanta Express 61-41 on Monday, held on to defeat The View (Arkansas) 53-51 on Tuesday, and spanked the Hoopdogs Basketball Association 63-42 on Wednesday. I had a chance to talk with Charles Riggins, the Lakers’ head coach, and he indicated that his son Ashon feeling a little under the weather, so Roderick Caldwell and Jeremy Larkin were doing the heavy lifting so far with for the team. Caldwell dropped 17 points in the first game, while Larkin is backing him up with toughness, pressure defense and scrap points. When asked about the possible showdown with the Elite Cavaliers, Riggins indicated, “I was hoping not to see them ,but it will add extra motivation to my team.” For the record, the Lakers enjoy a 6-1 record against the Elite Cavaliers, including to wins over their crosstown rivals this year. When asked about his team’s chances to advance deep in the tournament, Riggens thought he had a good chance to make the Final Four if, “Ashon (Riggins), John (Bubenhoffer) and Damien can get things rolling.” It sounds like North Carolina’s CB Spiders are the team to beat in the quarterfinals on Friday.


The Elite Cavilers’ (2-1) path to bracket play included a 70-53 win over the Alabama Fire; a 57-36 beat down of the Dallas Mustangs, and a tough 55-51 loss to the Charleston Cavaliers Blue. According to Coach Leon Ellis, their loss in pool play can be attributed to the fact they had to “bench a couple of bigs,” resulting in them having “to play small ball.” Also, the Cavilers have to incorporate two newly acquired bigs to the lineup, as they picked up Kameron Moore, 6’3 center from Mt Airy and Kobe Brown, a 6’0 swingman to play with them at the nationals. From what I understand, Jarron Cumberland is having a monster tournament so far, after scoring 28, 24 and 20 points, respectively in the first 3 games. When asked about his first round opponent, Ellis indicated “We will be fine. They have nice size and guard play, but they may struggle with our pressure.” Of course I had to ask him about his thoughts on another match up with the Cavaliers. "It’s going to be another great game, and whoever is playing well in the fourth quarter will win,” said Ellis.

The two other Ohio based teams, Dayton Salvation Army and the Cincinnati Bulldogs, both finished 1-2, and will begin play in the consolation bracket today. The Bulldogs will face off against the Hoopdogs Basketball Association at 11:40, while Dayton Salvation Army will face the winner of United Celtics versus Memphis Hoyas game at 2:00pm today. Both teams could face off in the 3rd round Friday at 2:00pm.

The Division II AAU Nationals are also being held in Memphis, and four teams are repping Ohio. The Ohio Players are 3-0 and will hookup with Texas Suns Select tonight at 6:20pm. The Ohio Hoopsters-Rockets are 2-1 and will face the North Carolina Hustle this morning. Columbus’ Team Court Vision will match up with the Memphis Red Hawks this morning. Finally, the Cincinnati All-Stars are 1-2 and will play the winner of the Georgia F.L.I.T.E versus Memphis Connection game in Classic Brackett play Friday at 1:00pm.

Stay tuned to Buckeye Prep as we try to keep you updated with the AAU Nationals results.
Posted by Buckeye Prep Report Founder at 12:28 PM 2 comments:

LaMonta Stone II, one of Ohio's top freshman floor generals, recently competed in Joe Kellers' Phenom 150 Camp at Alliance University in San Diego, California, and drew accolades. According to Rivals High school website, not only did Stone make the all-star team, he was the 3rd leading scorer (15 points) for the East squad that went on to win 107-93.  In addition, Stone was ranked 9th overall and as the # 1 point guard in the class by the Hoop Scoop. Ranked as one Buckeye Prep's Top 30 rising freshmen (2015), it comes as no surprise that Stone was able to excel at the national level.  According to his father, the camp "forced  LeMonta out of his comfort zone and gave him the opportunity to compete at the national level."

In addition to Stone, Hoop Scoop's Clark Francis ranked Columbus' Xavier Holston-Sims 7th amongst shooting guards, and he was selected as one of several "Top Defenders" at the camp, while Canal Winchester's Seth McCoy was ranked 41st overall, the11th best power forward in his division, and was selected for one of a handful of "Sportsmanship Awards." It should be noted that Dayton's Caleb Harris also participated in the freshman division at the 3-day camp and out of 200 players, he was ranked as the 18th best PG.  Not to be undone, older brother, Wesley Harris, was ranked #23 over all out of 160 10th & 11th graders, in addition to being ranked as the 4th best PG. Also, Canal Winchester's Alex McCoy both participated in the sophomore division. Congratulations to Stone and the other Ohio kids for representing the Buckeye State well!! 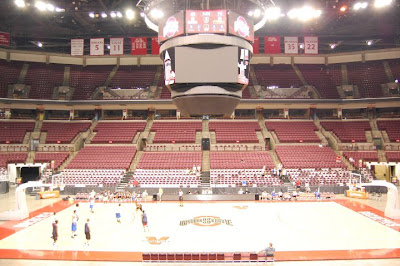 Thanks to a good friend who is a long time Buckeye Prep supporter and fan/follower of youth basketball in this state, below is a recap of the Ohio State Team Camp that was held this past weekend. The Ohio State Team Camp has consistently attracted some of the top high school teams in that state, and it sounds like this year is no exception. As is the case every year, most of the games were held in either St. John Arena or the Schottenstein Center. A total of 32 teams participated in each of the 2 days. (16 per bracket).

FRIDAY: Final four teams in the Scarlet Bracket – Toledo St. Johns, Westerville North, Hilliard Bradley and Chillicothe. In a mild upset, Westerville North edged a somewhat depleted St. John’s team on the strength of both Matt Rhodes and Jack Gibbs. Rhodes was especially effective with numerous 3-point baskets and finishes near the basket, and Gibbs combined some outside shooting with drives to the hoop. Chillicothe defeated Bradley in the other semifinal and then North beat Chillicothe in the final. In the Gray Bracket final four teams included Toledo Whitmer, Centerville, Gahanna Lincoln and Northland. Whitmer won over Centerville and Northland had little trouble with Gahanna to advance to the finals. There the Vikings won easily over the Panthers by a margin of more than 20 points.
SATURDAY: Saturday’s Scarlet Bracket saw Whitmer, Lakota East, Westerville North and Avon Lake in the final four. Whitmer defeated East and North defeated Avon Lake, both in competitive games. In the finals, Whitmer surprised North by a score of 68-61 with Nigel Hayes strong play down the stretch, taking the ball to the basket at will, a key difference. The Panthers were huge with a starting lineup this weekend of 6-8, 6-7 and 6-6 across the front line. Senior Chris Wormley, a 6-7 all-Ohio football star, showed considerable ability scoring inside for Whitmer.
In Saturday’s Gray Bracket, Centerville made the final four again and was joined by Columbus Walnut Ridge in addition to St. John’s and Northland. St. John’s won in a close contest over Centerville, 55-52, with junior point guard Austin Gardner and junior wing and Ohio State recruit Marc Loving combining for 20 of the Titans’ 28 second-half points. Northland won over Walnut Ridge to set up arguably the game of the weekend as Northland got by St. John’s 73-71 in overtime for the championship. Senior guard Jordan Potts hit a short jumper in the lane at the buzzer to send the game into OT at 65. Potts, 6-4 senior Kechaun Lewis and 6-8 Devon Scott led Northland, which used its size effectively all game. The Titans, playing the weekend without several potential starters, were led by Loving’s 30 points, while Gardner and senior wing guard Tarvis Malone (a 3-point specialist) also scored in double figures.
Posted by Buckeye Prep Report Founder at 8:36 AM No comments:

Needless to say, I was very surprised and disappointed to learn that Kurt Stubbs and his Ohio High School Hoops website are packing it in.  For several years, Kurt has provided quality exposure to many of the state's top players and programs.  My experience with Kurt has always been positive, as his stories and analysis were always fair and objective. Kurt was a hard worker and did his best to provide exposure for all areas of the state. I'm sure I speak for many basketball fans in this state when I say; Kurt Stubbs will be sorely missed!  Please see his farewell piece.
Posted by Buckeye Prep Report Founder at 3:21 PM 3 comments:

Recently, the Buckeye Prep Report was able to provide input to Clark Francis and the Hoop Scoop for their national top player lists.  From Ohio, nine rising freshmen made the list of 175 players, while five players made the top 100 list of rising 8th graders. In the next couple weeks the Hoops Scoop will be releasing their list of the top rising 7th graders in the nation, as well as the top rising 6th graders.  Hopefully, we can continue to get Ohio representation on these national lists. Below are the links to Hoop Scoop's national rankings.

I just got off the phone with Clay Dade, director of the Jr. All-American Camp, who indicated that every player listed on Buckeye Prep's Top 30 Rising Freshmen list is automatically invited to his Freshman All-American Camp, which is currently scheduled for July 1-3rd in Suwanee, GA (Atlanta Suburb).  In addition, all Buckeye Prep recommended players will receive a discounted price. Anyone interested in the camp should email Clay Dade ASAP at play@jrallmericancamp.com, or call at 301-980-5040. Some of the kids who have blown up at the camp include: Tony Farmer, D'Angelo Russell, James Blackman, Tyler Ulis, Stevie Taylor and many of 2011's elite players.  For additional information about the event, visit their website.