After finishing 4-0 by the end of the Midwest Circuit’s opening session in Indianapolis this past weekend, Carlos Davis’ Cincinnati-based 2027 R4L Pioneers currently hold a perfect 10-0 record.  Of note is the fact that the pioneers finished 6-0 at Coast 2 Coast Prep’s President’s Day Tournament in Lexington back in February, where they defeated the then #1 and # 2 ranked teams.

In Indy this past weekend, the third ranked R4L easily got by Dayton’s Team BNU (47-15), Columbus’ Renaissance Seminoles (63-29), Grand Park Premier Red 2027 (55-16) and Kentucky’s Manimal Elite (64-44).  Although R4L’s success was characterized as a “team effort,” it was noted that Joshua Tyson logged in a standout performance.  R4L will compete in session #2 of the Midwest Circuit before heading out to Kansas for the Never Walk on Hardwoood Tournament in August.  Congrats to the Pioneers for repping the Buckeye State! 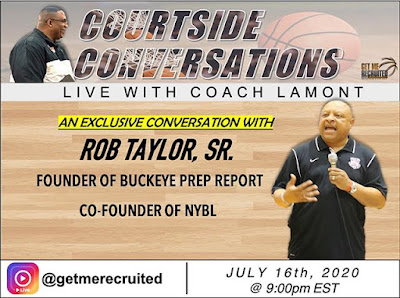 We're looking forward to joining Lamonte Taylor on his Courtside Conversation program on July 16th.  It should be a lot of fun!  We hope you can tune in.

Get Me Recruited Website
Posted by Buckeye Prep Report Founder at 3:59 PM 72 comments:

Despite the virus-shortened 2020 travel basketball season, a few teams have recently found opportunities to compete. In fact, this past weekend the George Hill organization hosted the G3 Invitational in Indianapolis, IN.  In that event, the 2025 Superfriends dominated the 7th grade division, as they rode a 6-0 record to a title.