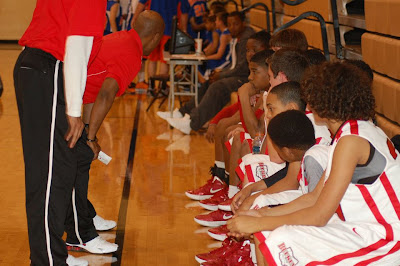 Day two of the Buckeye Prep Invitational ended much like Friday; very competitive. For the first time ever, I had a chance to get around to all of the facilities to take in some of the action.  At the Dublin site, I caught the end of the Ohio Purple vs Hidden Gems Orange (9th) game. While I was there, I watched Purple’s James Bolden, a 5’10 SG from Cincinnati, drop a game-high 22 points on Hidden Gems.
In addition, Don Jackson’s 6th grade Michigan Titans team was getting it done against Next level. Next Level’s Peyton Harris, only a 5th grader, was the work horse and the leading scorer. I continue to be impressed with Cody Blankenburg, a slick lil PG from the state up north. I last saw Blankenburg at my Buckeye Prep Elite Showcase, and he proved his March performance at the event was no fluke. The best part of his game is penetration and dishing.
Dwight Blair’s DB Hoops teams are making noise this summer, as he has begun to stock pile northeast Ohio talent.  His 7th grade squad had its way with Toledo Elite, to the tune of a 62-39 victory. DB Hoops is powered by John Williams, who knows how to run the point and get his teammates involved.  Williams finished with 13 points. Naz Bohanan had a big game also, as he logged in a game-high 14 points. Keep an eye on Loraine’s Deuce Martin and West Salem’s Derek Koch, both of whom are playing well this weekend.
Although they were playing up in the U17 division, King James Shooting Stars 2014 looked more than comfortable against the Showtime Ballers. Showtime may have gotten off to a slow start in the first half, but they fought back to within 2 points midway through the first half. Despite the mini run, the success was only short lived, as King James would go on a run of their own, and finish the half up 44 to 26, then collect a 74-44 win. King James is loaded with talent, with guys like Zac McCormick (16 pts), Cameron Taylor (8 pts), and Vincent Edwards (10 pts). Finally, let me say this, he may not look like it when he walks in the gym, but Zach McCormick will put you in a poster if you try and challenge him at the rim.  McCormick is not only super athletic; he is skilled as will and possess a nice jump shot.
The 10th grade Michigan Titans faced off against the Ohio Hoopsters, and by the time the final horn sounded, Michigan had claimed a 58-36 victory. The Titans were led in scoring by Collen Jones (16 pts), Nick Spitleg (14). The top guys for the Hoopsters were Douglas Bennefield (10 pts) and Gabe Rodriquez (8 pts). In the sophomore division, Millennium Fire Select notched a close 46-42 win over Nitro USA.  Ohio Varsity White (sophomores) pulled out a 76-65 win over Buckeye Nation.  Big Alex Stewart led all scorers with 16 points, while J. Thomas finished with 14 and Ty Hairston added 11.
They may still be young, but I saw some 4th graders today who straight balled. Georgia’s Worldwide Sun Devils rolled into town and finished the day 3-0 heading into championship Sunday. They’re on the small side, but guard play is the key to this team.  The team’s top guy is Kalil Brantley, a dynamite floor leader with a solid skill package. While we are on the subject of point men, I plan to keep an eye out on Carter Mims from Dayton. From what little I saw of him, I can’t imagine there are many kids his age who can handle the rock like this kid.  He has a lot of tricks in his bag, and is only a couple of growth spurts away from being special. Last but certainly not least, Toledo’s Zeb Jackson continues to impress this evaluator. This kid has as complete a game as you might expect for a 4th grader. He can shoot, penetrate, pass and defend. Add in a high basketball IQ and poise under pressure; it’s easy to see why he might have a bright future.
I finally had a chance to check out Ed Lyshe’s 6th grade Buckeye Prep team, and I could not have been more proud of their effort.  This team may not be the most talented team in the state, but they play the game the right way. I really enjoyed how they played unselfishly, passed the ball well, and defended from whistle to whistle. The strength of this team lies with its guard play.  Gahanna’s Chase Rankin is the lead guy for this team, and he excels at running the show. Rankin continues to show development in not only his skill set, but how he approaches the game. In support, Julius Brown is often the spark plug for this team and brings toughness and aggressiveness to the table. This team is deep at the guard spot, as evidenced by the contribution of Troy Taylor Jr., who is talented in his own right. Kristian Pachac was also a standout in the game I watched.
King James’ U-17 advanced to bracket play with an undefeated record  With Jack Gibbs Jr. still recovering from knee surgery, primary leadership of the team has been delegated to Randall Clarkson Jr. who has embraced his new role. Clarkson has been on attack mode the entire tournament. I heard some good things about Tyree Harris, a long athletic wing with Murphy AC Elite.Word has it, he has a high motor, runs the floor like a deer and is very active around the rim. Day three should prove to be pretty interesting
Day 2 Pictures
Posted by Buckeye Prep Report Founder at 7:18 AM